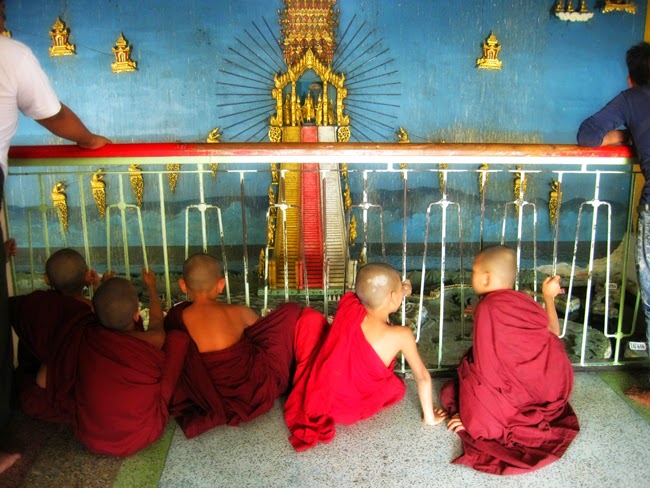 A long travel to Mandalay

Myanmar has always been a dream destination. One day we finally stopped dreaming and booked Quatar airline flights to Bangkok and from Bangkok we continued the trip to Mandalay. It was the first time we travelled with this airline. First part was absolutely fine. I enjoyed the vegetarian curry and 'The Hundred-Foot journey' (movie about Indian and French food... mmm). The first flight of nearly 6 hours passed quickly. We arrived in Doha for the transfer to Bangkok.
Doha airport was ridiculously big, too big for the number of flight and couple of lost travelers who were wandering through the endless halls on the way to their gate. Despite the size of the building, the airport itself was not much of a big deal. Couple of expensive shops here and there and a tiny food court was pretty much the only 'attraction'. There were plenty of free sits and fast wifi connection, so we could easily keep ourself busy for the next four hours.
Our energy level was not the same anymore when we entered the next airplane. We couldn't sleep and therefore this trip seemed endless. I was disappointed there was no vegetarian food on board and we had already enough of traveling.
It's been only six years ago when I was in Bangkok and boy it has changed! Thailand is clearly the most popular country among tourists. I don't know why, but I was absolutely surprised by the crowds and huge queues for the passport check. We thought we had plenty of time but we nearly missed our third flight to Mandalay. As we landed at Suvarnhabhumi and our Mandalay flight departed from Don Muang. By showing our e-tickets for departure on the same day from the other airport we could take a free shuttle bus which (due to heavy traffic) took about 1,5 hour to the other airport. 10 minutes before the check in counter closed we were dropped off, asked 3 officials where to check in and got three different answers. Tired, unable to think anymore, confused after no idea how many hours of traveling, we made it just on time. We flew to Mandalay with Air Asia. It was a short flight, nothing special, I even slept a bit. Everything went smooth: we received our visa, collected luggage, were welcomed by friendly locals dressed in longyis and with applied thanaka on their faces, arranged a shared taxi to the city and get our first package of kiats which is the local currency.

The way from mandalay airport to Mandalay is a long one and the roads aren't good. At this point I was totally fed up with traveling and couldn't wait any much longer to get in the hotel. We shared our taxi with couple of Swedes and two locals. One of the poor locals became suddenly carsick and puked inside a car. Welcome to Myanmar! Luckily we were already down town at this very moment and could leave the stinky car fairly soon after the incident.
After arriving into hotel, I immediately took a needed sleep and after this power nap we took a funny tuk tuk, burmese style, to a restaurant. The driver took us to the 'Too Too restaurant' which was also mentioned by Lonely Planet. At this moment they were already out of food and we checked at Vegetarian restaurant 'Marie Min'. Touristic place, too expensive for Myanmar, but the food was actually very tasty and we discovered our first favorite dish of Myanmar: Lahped Thoke! It was a strange looking salad, but oh so good! Chopped cabbage with tomatoes, crispy nuts, fermented tea leaves and couple of ingredients extra created a surprisingly fresh and unique dish.
Surprisingly also in the big cities the streets turned out to dark, the area had nothing more to offer, so we took the same ride to the hotel. At this very first evening we noticed how curious the locals were, as if they never have seen 'caucasian people' before. The country is ofcourse at its very early stages of development. It doesn't see that much tourists like their neighbours Thailand and Cambodia. Yes, Myanmar is developing and therefore maybe comes across a bit primitive, but also pure and very authentic. That has it's benefits and ofcource some downsides. The first impressions are positive. Everybody is friendly and we feel very welcome and comfortable. 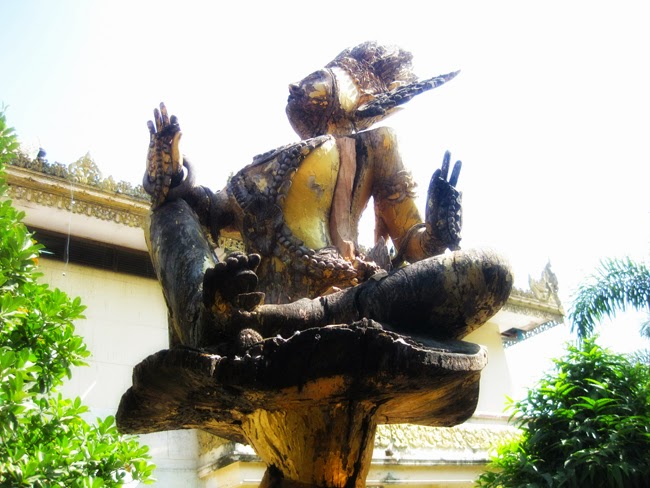 Fully rested we were ready to explore Mandalay on bikes.
Riding a bike in Mandalay is a challenge, but overly exciting and simply a perfect way to get to know the city and it's vibe. The crossings were the scariest at the start. With time I got more certain, but at the end this adventure totally exhausted me.
Our only destination on this trip was Mahamuni Paya – an important buddhist temple with it's famous Buddha image. To reach that we took a very busy 84th street with tons of crazy crossings. It was basically a straight road to the temple, though we get lost a bit. There were couple of different religious shines in that neighborhood with Burmese writings at the entrances only, which confused us. We were only a couple of blocks off the downtown and suddenly no one was able to speak any English. A lady on the street showed us the way, we were actually very close.
Right before the temple we walked in the colorful arts and crafts market first. Souvenirs in Myanmar are very special, I immediately have a feeling I can score some good presents. The temple itself didn't really wowed us. The atmosphere and people were much more interesting. The main attraction is the Buddha image, only men are allowed to come near and stick golden leaves on it. This was the first time I have experienced discrimination within a buddhist temple. I've been to Asia a lot and never have I seen a limited access for women before. I didn’t really care as I am not a religious person, but I found it really strange and disappointingly. We would run into this odd rule more often in Myanmar. 'Fortunately' there were couple of TV screens on which this gold sticking process can be seen. We strolled a bit more around complex and watched people and their habits. Burmese culture is so pure, traditional and one of a kind, I cant get enough of watching at longyis and thanakas.
We took another crazy bike ride back to downtown to grab some food. Dusty roads, crazy traffic and impressions are tiring. We had some Thai food, relaxed a bit, but were not ready with Mandalay yet. Another destination on our list was the Mandalay hill. Only we decided to leave the bikes at the hotel and take a cab to the top.
Earlier that day at the Mahamuni Paya we were pretty much the only tourists and because of that we thought the hill would be just as authentic and maybe even quite. We were wrong, the Mandalay Hill was in contrast full of tourists, especially at this time of the day when everybody waited to see the sunset. There were many young monks hanging around, they didn't mind to pose for the photo's, in exchange they used the tourists presence to practice their English skills. The whole area was way to crowded, but the sunset was worth it.
Mandalay left a good impression on us. We were even more eager now to travel to Bagan, which is for some a reason to visit Myanmar. 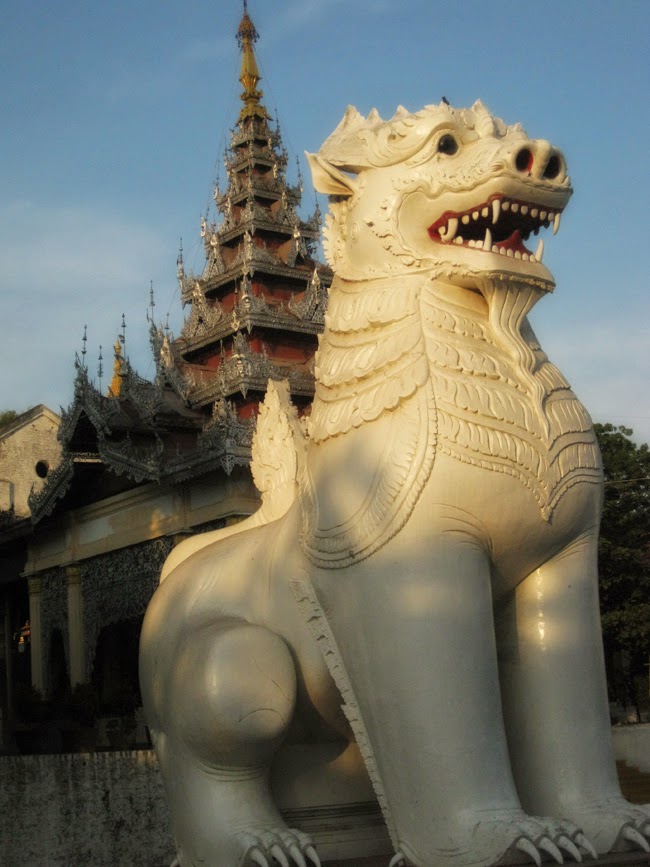 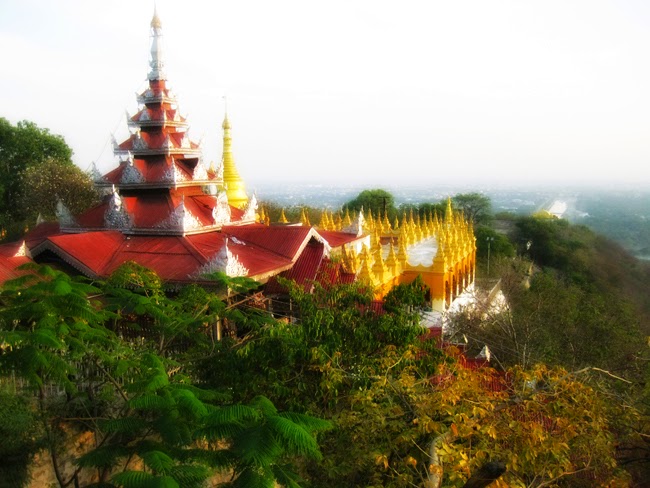 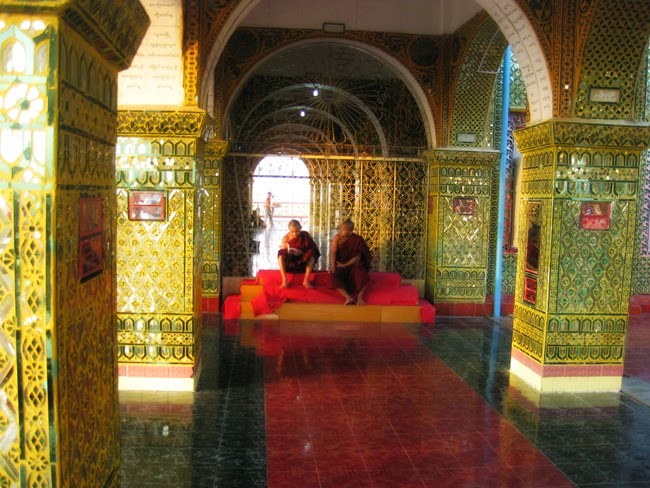 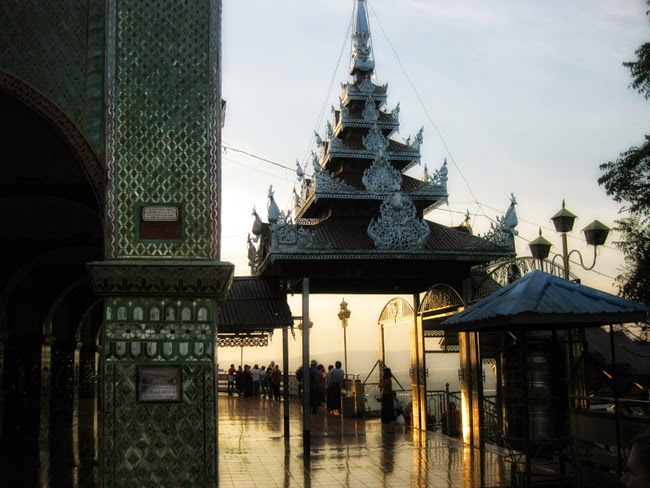 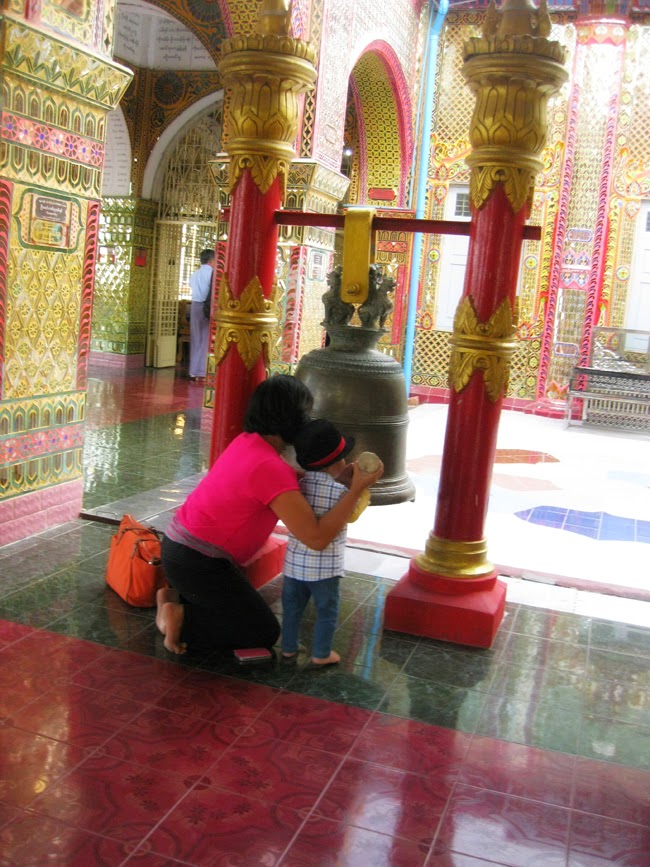 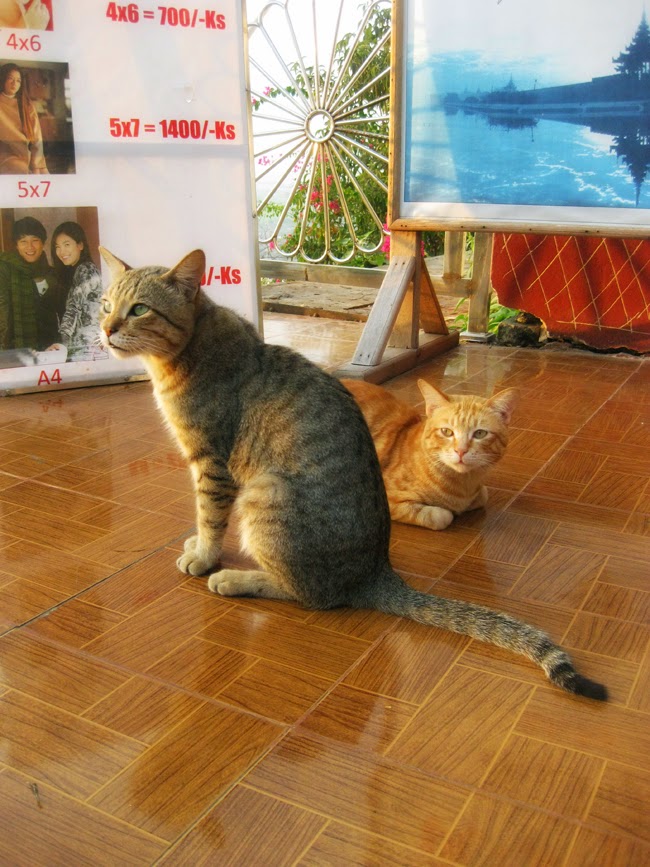 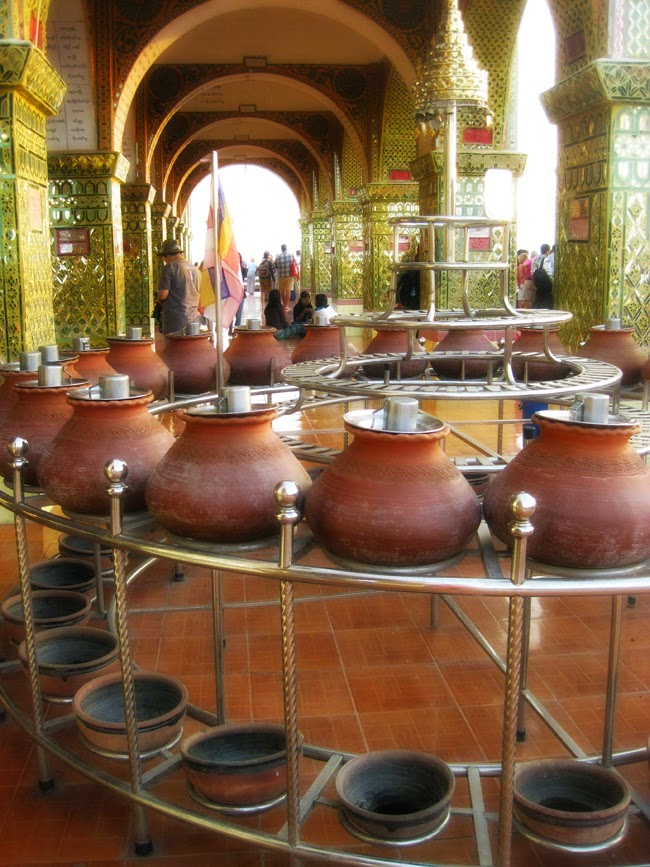 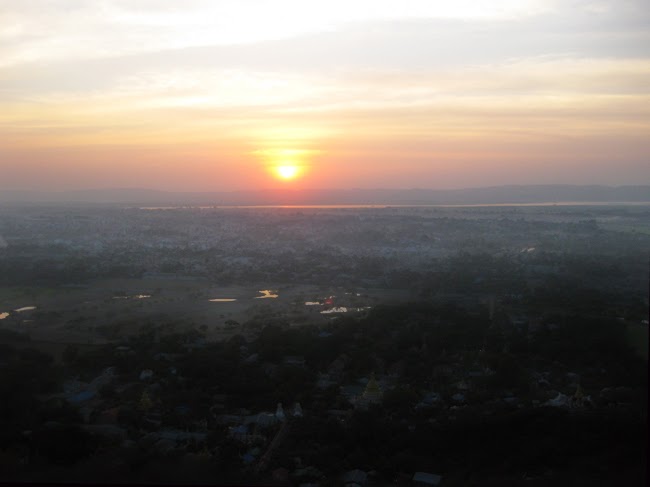 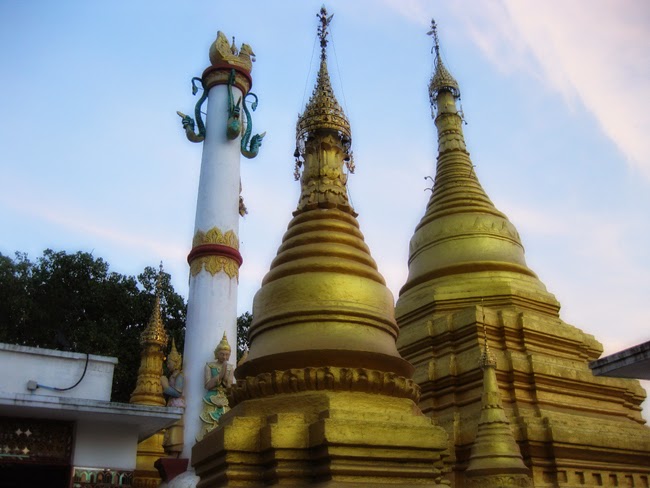